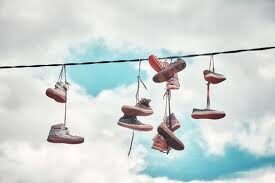 It can be found in any city, no matter how large or small. You’ll notice it on your way home in the car or when taking a stroll around your neighborhood. A pair of shoes with laces knotted together is strung up from the power lines at millions of locations across the globe. You may not think much of it, but isn’t it strange that this is such a common occurrence? It’s enough to make you wonder how those shoes got there in the first place.

What is Shoe Tossing?

Shoe tossing, also known as shoe-throwing or shoe flinging, is when a pair of shoes’ laces are tied together and thrown over power lines or telephone wires. Shoes can also be tossed over fences or trees, but they’re most commonly spotted on telephone wires and power lines.

Although the practice is so frequent, there is no apparent reason why the shoes end up where they do. The shoes could represent local customs, culture, or other things.

The act of tossing shoes satisfies a long-standing human desire to be remembered, to demonstrate our existence. Changing the physical area we occupy, whether it’s leaving shoes on electrical lines or splattering paint on the wall, accomplishes this.

As with the industry workers leaving behind their sneakers, as with the New York City guys staring up and recalling their former shoes, the shoes could only have gotten up there if the owners hurled them up. In this way, the shoes’ owner left an indelible mark on their surroundings.

Strangers who look at the shoes can see the owner’s mark even if they don’t know who owns them. The shoes are proof that they existed, and anyone can take up an old pair of shoes and leave their mark too.

Another reason people put throw shoes on electrical lines is to make memories. For example, when someone is fired from a restaurant, they can hang their shoes on the power line outside as memorabilia. If they are unwilling to give or throw away their shoes, some folks will hang them on a power line along their usual path. They’ll be reminded of all the fun experiences they had while wearing those sneakers every time they pass by them. Where else might your sneakers be displayed as public yet personal memorabilia?

People also often use the power lines to mark critical life transitions by hanging their sneakers on power lines. For example, one can toss all of the shoes they wore when hustling as part of a gang. When such people look back at their shoes, it reminds them of how different they have become.

After losing their virginity, male teens in various parts of the world knot the laces of their sneakers together and fling them up on power wires. As a result, the shoes commemorate a significant event in the young man’s life. Perhaps the inevitability of losing their shoes to the power lines is analogous to the inevitability of losing one’s virginity; once it’s gone, it’s gone forever.

Hanging shoes on power lines has been related to gangs establishing their territory in several locations, such as New York City in the United States. Each gang is associated with a specific hue. For example, gang A may be associated with purple and yellow, so you know you’re in their territory if you see a purple or yellow sneaker hanging from the lines. If you are a member of a rival gang, this means that if one of the opposing gang members sees you, you could be in serious trouble.

When a gang member is shot, the other members tie up his shoes and toss them against electricity lines. This serves as a tribute to individuals who have passed away.

Some people may toss their shoes on electrical lines after witnessing someone else do so. The hallmark of a meme is the replication of something for the sake of replication.

You’ve probably seen a popular meme if you’ve spent ten minutes on the internet. Memes predate the digital age. Around the 1930s, for example, there was a poster that said “Lewis was here,” which many people saw and copied in their homes and cities all over the world.

What to Know When Tossing Shoes

When throwing shoes, make sure you have great aim. Otherwise, a misdirected shoe landing where it shouldn’t can end up injuring someone. Shoes with heavy rubber soles, in particular, can harm delicate areas like the face and neck.

If you finally land your sneakers on the power line but do not adequately hinge them on the line, they are likely to fall. Furthermore, gravity coupled with their tough rubber soles could cause injury if they fall on someone’s head because they are so far up.

As a result, if you decide to throw your shoes on power wires, make sure you practice your aim beforehand to guarantee that the shoes not only land where they need to but also stay there.

Retrieving the Shoes is Dangerous

Some people have been seen using long wooden planks to collect shoes dangling from power lines. Being so close to an electrical line, on the contrary, is unsafe. Because the electrical current in a power line is far too high for the human body to handle, mistakenly touching the line could result in instant death. Even if you believe the substance you are using, such as plastics or wood, does not conduct electricity, other factors, such as moisture gathered on the item’s surface, could permit the dangerous voltage to reach your body.

Despite the lack of unanimity on why people throw their shoes into electrical lines, many say it’s because there’s gang activity in the area. Not only that, but residents may believe that bullies in the neighborhood steal people’s shoes and hang them on power wires. It may not be true; your neighborhood may be fantastic, but the connotation of shoes strung around power lines may convey the wrong message to passers-by.

Why Are Nike Shoes So Narrow?

Dress Shoes You Can Run In

What Shoes to Wear with Rompers

By Nashon Omega4 days ago0

What Shoes to Wear with Mom Jeans

Shoes To Wear With Ankle Pants

Shoes to Wear with School Uniform

Why Do Ironworkers Wear Wedge Boots?