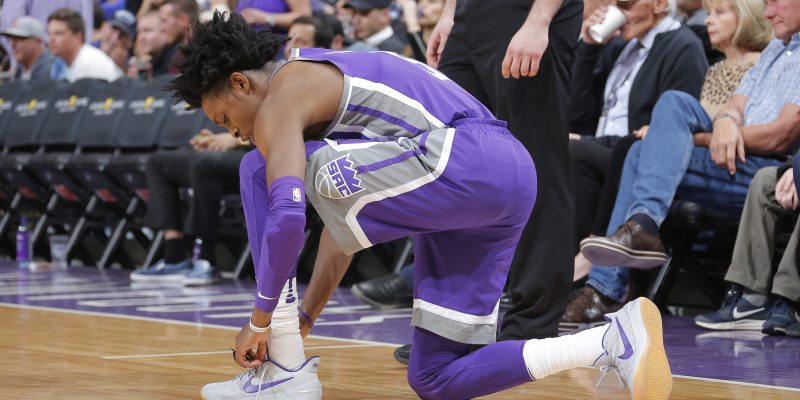 De’aaron Martez Fox is among the top-ranking point guards in American professional basketball, currently playing for the Sacramento Kings. Before signing up for the Kings, he played for the Kentucky Wildcats (college basketball), the platform that allowed him to get into the 2017 NBA draft. Born on December 20, 1997, De’aaron Fox is a star many people believe holds the potential to drive Sacramento Kings to greater heights. As such, it is not surprising that the Kings decided to lock him up with the highest value contract extension (worth $163 million but could rise to $195.6 million) that runs up to 2026.

Since De’aaron Fox is not just any ordinary player, it is only expected of him to maintain an out-of-this-world shoe collection. It is the basketball superstar lifestyle, and for a sport that is equally as much about looks and extravagance, he does not disappoint.

To kick-off De’aaron Fox’s favorite shoes, we pick it up from his 2019 collaboration with Nike:

A partnership with Nike led to the birth of the ‘Swipa’ (Fox’s nickname), a mismatched and multicolored creation with the DNA of the Air Max 1. De’aaron Fox says it is his interest in astronomy that inspired the ideas for these shoes. For this reason, they feature the standard colors that represent planets and equations from the field of astrodynamics on the insoles. These collaboration shoes are defined by their colorfulness, with the left shoe primarily being burgundy, black, and white and the right being aqua blue, black, and burnt orange.

De’aaron Fox is a self-proclaimed lover of the Air Max 97 and made this clear on a direct question-answer trivia with his fans. He has been spotted wearing these masterpieces from Nike countless times, and a sneak peek into his collection revealed he keeps quite a number of pairs.

Ever since De’aaron Fox began his professional career, a favorite pair for his regular season has been the Air Jordan 28. Fox typically goes for the high-top versions of this signature shoe that was developed in honor of Michael Jordan.

The other pairs of shoes that have defined De’aaron Fox’s appearances in the NBA are the Kobe 9 and 10. Similar to the Air Jordan 28s, Fox prefers the high-top versions of these shoes that were made to celebrate and honor Kobe Bryant.

De’aaron Fox has had one of the best player-brand relationships with Nike. This was made more evident when the company gifted him a whimsical pair of Dragonball inspired Kobe AD PE (player exclusive). Fox received these shoes that are inspired by the superhuman cartoon character in Dragonball Z in 2017.

Nike PG1 kicks were De’aaron Fox’s favorite pair for the 2017 summer league. Fans noticed how much he loved to have these pairs in colorful colors, a distinct sense of fashion style that he has held onto over the years.