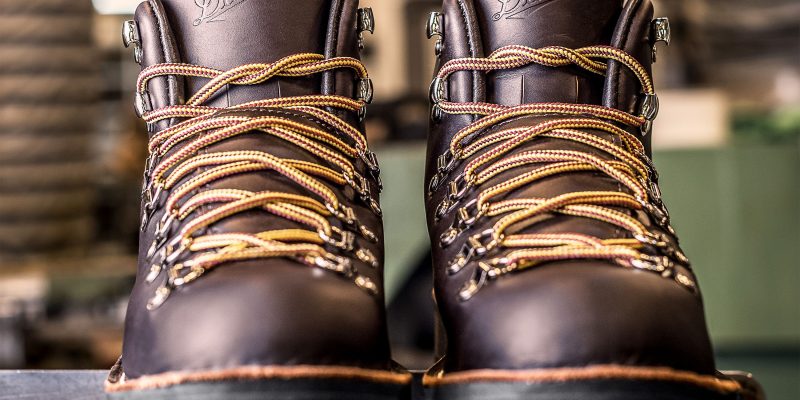 Having a decent comfortable pair of work boots is important when your feet for an extended period of time. In this post, we will do a comparison of two popular brands of work-style boots; Danner vs Thorogood.

Both Danner and Thorogood are American-based companies and both still produce some of their models here in the USA.

If you’re thinking about Thorogood and Danner, the good news is that both brands are premium work boots that boast a long impressive history of providing excellent quality and reliability. Both brands provide high-quality work boots for various sorts of workplaces, both indoors and outdoors.

Danner vs Thorogood: Differences and Similarities

Both Danner and Thorogood are available in numerous options of sizing. Both are made in the USA, their stitching design is similar and both feature durable elater uppers. Perhaps the biggest difference is the fact that Thorogood boots usually don’t require a break-in period and are good to wear out of the box, as opposed to Danner, which takes a while to break-in properly.

Speaking of similarities, both these types have many features in common. But when it comparison, it is quite hard to differentiate. As for the selection, it is exclusively subject to your specific taste and job demands. How about we dive further!

A Brief History of Danner Boots

As the name suggests, Danner boots were founded by Charles Danner, who dared to the Pacific Northwest to develop premium work boots for loggers in 1932.  These boots are produced in the US. This American footwear company was a subsidiary of LaCrosse Footwear, which was established in 1897.

Following the advent of the Danner brand in 1932, they began manufacturing in Portland, Oregon. Their most popular model is Quarry Boots.

Danner boots are generally made from full-grain leather. These boots are derived from the top layer of the animal’s hide, which is oil tanned. That means they don’t really have the luster of the chrome-tanned leather like you would find in slightly dressier boots like Wolverine 1000 Mile for that matter.

The fabric is about 1.5 millimeters thick, and a little thinner than what’s found on mot tougher work boots. But on the bright side, this does make the leather mold more easily to the shape of your foot.

Danner boots are the ultimate rugged outdoor footgear that’s built to brush off any natural hindrances during physical work during the daily commute. They are developed with stitch-down construction for quick resoling.

Danner boots are made from full-grain leather and the Gore-Tex fabric utilized in some of these boots is breathable and absolutely waterproof to keep your feet dry. In other words, Danner boots are meant to challenge all terrains and weather conditions.

The outsoles of these boots are shock-resistant and provide great traction. The boots are also associated with excellent comfort and flexibility. Danner boots feature nylon shanks to enhance flexibility.

Danner boots are available in safety-toe, plain-toe, and insulated versions. They also come in both comfortable wedge outsoles for smooth surfaces and heavy-duty Vibram outsole for harsh terrains. The classic lace-to-toe design of these work boots provides toughness while transferring the much-needed control of your feet.

Thorogood boots are made by Weinbrenner Shoe Company, based in Wisconsin, with deep roots in American culture. Weinbrenner shoe co. started manufacturing Thorogood boots in the late 1800s for the US Army, in both WW I and WW II. Up and even now, Thorogood has been carrying forward their American pride into a present-day business.

Albert Weinbrenner, son of a German cobbler, commenced his apprenticeship at the age of 13. His father guided him about making footwear, and when he turned 20, Albert started making boots for his friend, working in trading occupations in Milwaukee.

Albert later started his own cobbler business in 1892 at the age of 27. He tastes his immediate after introducing the Jabber Boots, and since then, Albert and his company never looked back. Some of their most popular boots are their Thorogood American Heritage Boots.

These boots feature a style of heavy-duty boots that are designed to withstand the harshest weather conditions. They can resist wet and marshy environments where you may encounter uneven and erratic terrains. These boots are built with 100% leather and have wedge soles for comfort.

Thorogood boots come with a leather design rather than rubber. They also incorporate a steel shank to ensure sturdiness and protection to the lower part of the boot. These boots are accessible in safety, moc-toe, plain toe, and round toe and also in insulated versions.

The width and the length of both brands come in various options in terms of sizing to keep the users’ convenience in view.

These two models feature durable leather uppers to offer sustainable comfort to your feet, even after wearing them for long working shifts.

Generally, both of these boots come in old-fashioned brown color, though are black colored. The stitching pattern of these two brands can be seen around the toe and heel sections. This stitching design is purposely designed to create contrast between the leather and the color of the stitches, which depicts a cosmetic consideration.

Both Danner and Thorogood boots are exceptionally slip-safe. Wearing them minimizes the chances of slipping and falling down, especially when working on slick/oily surfaces.

Both Danner and Thorogood work boots are manufactured in the US to ensure higher quality. As such, there are fewer chances of getting shoddy products from any of these brands.

The outsoles featured by moth models are light-colored while working or strolling across the floor, you happen to leave no marks behind.

Danner and Thorogood boots both feature plain-toe or safety-toe designs.

Danner vs Thorogood Boots: The Differences

As you may have already figured out, these two brands have much of what you would expect to see in ideal work boots. However, there are a few differences between them that may influence your decision as to which to get along with.

While both brands are extremely comparative in design, some have it that the Danner boots are a bit stiff on the ankles right out of the box. But after wearing them for a while, you may find that they fit around the contours of your feet quite comfortably. On the other hand, Thorogood boots come already broken right out of the box.

Some users also stated that the Danner outsole wears out relatively faster than anticipated. We’ve got no reports of anyone complaining about the Thorogood or something to do with their soles wearing out too fast. Overall, Thorogood seems to have better reviews compared to Danner on Amazon.

Application of Both These Boots

Are Thorogood Boots Worth The Money?

Thorogood boots are always a solid match for users. They are exceptionally easy to break-in. While they are not so cheap, they are great value for money.

Are Danner Boots of Good Quality?

These are not the cheapest boots either but they come in good quality. Danner boots are built to last for a long time.

Thorogood boots run true to size, thus offers a good fit. You can have them on your feet for 8 hours or more and still have full comfort.

If you want to size a pair of Thorogood boots, wear a medium thickness pair of socks and stand on the sizing paper. Put a mark at the end of your heel (holding a pencil vertically at 90 degrees. Then measure the heel-to-toe mark. Now use the inch-to-size table to determine your size. Aside from the standard sizing, the elements that factor into how a certain boot fits are:

Every boot from Danner is handmade and is meant to hold up in tough conditions and satisfy the enduring guidelines.

Danner boots are equipped with Gore-Tex Liners, which makes them water-resistant.

Are There Thorogood For Women?

Danner vs Thorogood: The Verdict

The writing is on the wall. In reality, these two brands are very much alike in cost and different aspects. Both Danner and Thorogood have a long-rooted history of producing premium work boots for many various types of jobs and trades. It is therefore quite hard to settle on a choice between either of them on the ground that they are both so comparative.

Customers, for the most part, are satisfied with their Danner boots as well as their Thorogood boots- though it seems like the biggest difference between them stems from the fact that Thorogood boots come already broken in and perfectly usable out of the box.

The Danner is more of a traditional work boot in terms of look, whereas the Thorogood boot is relatively nicer in the same department. The 8″ Mock’s for instance are very nice in leather, though some still prefer the Danner. Nonetheless, if you want me personally choose, I would go with this boot by Danner as my favorite outdoor work boot and take this boot by Thorogood as my favorite indoor work boot.

That said, everything is subject to your personal tastes and work requirements. The first move to choosing an ideal work boot usually comes down to determining whether you need to prioritize comfort or toughness in your work boots. Then go from there.

The takeaway for Danner vs Thorogood boots is that once you understand your own needs, both brands possibly have a boot that can work for you. Thus far, dive into the specifics and choose which one bodes well.

How To Break In Doc Martens