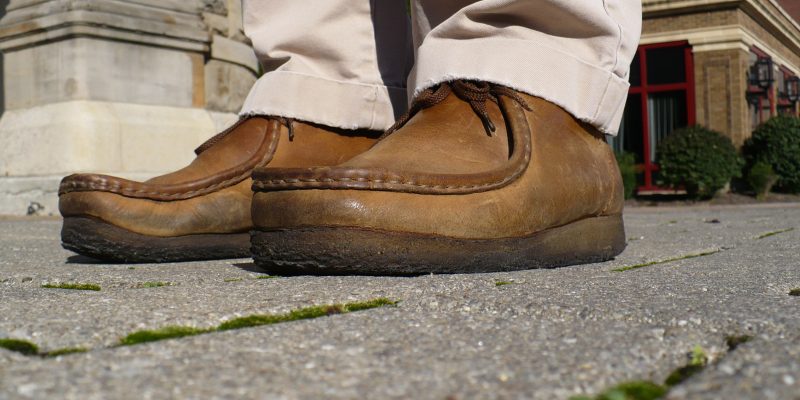 Clarks is one of the most popular footwear brands, known for their classy, dressy, and sophisticated shoes that prioritize style.

The brand offers a variety of different shoe designs for men, each model having its own aesthetics, so you can easily find a good fit for your preferences. Aside from their extensive selection, two models have taken the footwear market by storm.

These two Clarks versions are the Stinson and the Wallabee. With the first impression, anyone would suggest that there aren’t any differences between these two shoes. And of course, with regard to the appearance, there really isn’t much discrepancy. But take a closer look at the shoes, and you’ll realize that they’re completely different models.

Based on our involvement in the two shoes, we’d have to recommend the Wallabee over the Stinson. These shoes feel like they’re made of higher quality material, featuring better craftsmanship altogether.

Wallies proves this by including a few extra features and design traits that clearly put them above the Stinson. Be that as it may, don’t make any conclusions yet- here is a detailed comparison on why the Wallabee puts your best foot forward.

The Wallabees appeared on the market back in the 1960s. Much like the Ramble and the Desert boot, the Wallabee proceeded to quite possibly the most iconic designs offered by the Clarks brand. Their idea was simple- develop timeless footwear that would rise above current fashion trends.

Needless to say, Clark succeeded, and the Wallabees remain one of their most popular models to date.

While most Wallies come in softened leather and suede, there have been lots of variations over the past years. Since the overall silhouette of the shoe is simple and basic, it makes an excellent choice for designers who want to work inline with Clark’s company.

There have been lots of collaborations with the Wallabees, some of the most notable being those with Woolrich and the uniform experiment. They took different spins on materials and colorways to deliver unique yet familiar Wallabees designs.

Clarks Stinson joined the footwear industry fairly recently and rather unnoticed. Perhaps that’s because the shoe bears a remarkable resemblance with the Wallabee- so most didn’t realize that it was a new shoe altogether.

Similar to the Wallabees, the Stinson employs leather and suede as the most common and recognized upper of choice. They also come in a range of colors, some of which are more daring compared to the classic Wallabee.

Anyone looking at the shoe side by side at first glance would say they’re versions of the same design. And from various perspectives, that may very well be true. There are some aspects that set both of these models apart, though we’re going to try to uncover them.

When it comes to material and construction, the uppers for the Stinson and Wallabees rarely differ. Of course, there are lots of different uppers design to choose from, but basically, the materials used are the same. That means any full grain leather featured in Wallabee is likely available under the Stinson design as well. The same case applies to suede versions.

Perhaps the only significant thing that changes the uppers is that they’re relatively sturdier on the Wallabees. Whether the fabrics go through extra process and treatments for the Wallies isn’t clearly stated anywhere. However, a mere touch of the shoe will definitely make you feel the difference in structure.

The Stinson’s, on the other hand, feels a lot softer, like they’re meant to conform to the movements of your feet. Also, they tend to scuff up a little more than Wallabees, which could indicate an extra treatment process employed on the latter to produce a sturdier upper structure.

Another main difference stems from the outsoles. The material used in the Stinson soles is EVA, as opposed to the Wallabees, which generally uses crepe. In most cases, crepe soles are slightly more durable and more agreeable. Thus the more you wear the shoes, the more they are likely to mold to your individual foot shape and offer greater comfort.

Speaking of the Stinson’s, the soles aren’t really as comfortable. They also don’t break-in easily, even after a while of use. It is also good to state that EVA tends to sustain wear a little faster than a crepe. Ultimately, the traction will be affected in the long run, making Stinson less slip-resistant against different surfaces.

At first glance, anyone would suggest that both shoes are exactly the same. But with a close inspection, you will track down a couple of contrasts that set them apart. For example, you will find that the Wallabees feature a slightly square toe shape that gives more room for dress socks and accommodates wider feet rather comfortably.

A less significant difference is the stitching. At sight, the stitches on both shoes appear to be pretty much the same. However, the company claims that the stitches featured on the Wallabees are much more durable than their Stinson counterparts.

The treads are waxed and oiled, giving them tough to wear and tear, contrary to the Stinson, which features typical, untreated threads.

Speaking of design, both the Wallabees and the Stinson are offered in boot and shoe variations. The Wallabee boot version’s shaft measures approx. 4 inches from the heel, whereas the Stinson comes in slightly lower at 3.75 inches.

It’s also important to state that Stinson comes in two different shoe options; the Stinson shoe and the Lo boot. The Lo boot is designed with a lower shaft than the shoe, making the version appear slightly more casual.

Another thing that differs between the Stinson and Wallabee is that they offer different levels of comfort and durability. This is probably because of the more detailed craftsmanship employed in each Wallabee. Besides, the fact that they use crepe soles makes them better fitting as time goes on.

The difference in quality is noticeable when you hold the shoes. The Wallabees feel like they’re more durable, with greater built structure and more resistance to wear and tear and obvious damage.

The Stinson, though they feel structured, they tend to feel less durable in comparison. One would even say they feel like those kinds of shoes that fall apart after some time of wear. So they certainly aren’t among the best when it comes to durability.

Indeed, considering all that’s been said, it’s just obvious that Wallabees would be more expensive than Stinson. The difference in price can be as much as a hundred dollars, subject to the model and material you choose. But in the end, what you’re getting is an iconic footwear choice that maximizes your money’s worth.

Thus if you’re ready to splurge a little more on your shoes, then the Wallabee design is a one-stop option to satisfy you in most aspects. The shoes are made with excellent craftsmanship that demonstrates just why they become such a hit in the 60s.

On the other hand, if you’re set on copping the Wallabees but are trying to remain within a budget, the Stinson might be a considerable substitute. These shoes look nearly the same. So to those who aren’t particularly aware of either version, you could simply pass them off as the most popular Wallabee look alike.

Just remember that you ultimately get what you pay for. So if you prefer saving some bucks, expect to get less comfort, less durability, and less support out of your choice. In any case, though, both these shoes provide some pretty comparable aesthetics.

True enough, Clarks has come out with huge loads of designs, with great focus to satisfy all of their buyers. As such, the brand has put out some versions like Stinson, which essentially mimics the Wallabee with trivial sacrifices to make them more functional for the budget crowd.

It is their way of meeting buyers’ needs without skimping on aesthetics that most of their customers and prospects have in love with.

As you’d probably think, the difference you pay for the Wallabee is certainly worth what you’re getting in return. They cost a little more, but with the price tag comes a solid, reliable, comfortable, and iconic shoe that you can truly be glad for.  The Wallabees are more of a footwear investment. So if you’re really after something that you can count on over the long haul, the Wallabees are an obvious choice.

For Stinson, it isn’t a bad option. If you’re just looking to wear the iconic Clarks now and then, the durability and comfort level offered by the Stinson might very well be enough to keep up with your preferences.

That being said, we can recommend both shoes. But if you can manage to spend a little more for the Wallabee, then go for it. These shoes are designed for more premium styles and higher durability standards. Meaning you can rest assured you’re getting something that will last for a great cause than any budget option.