Let’s be honest: Allen Edmonds Park Avenues are predominant. Their black cap toe oxford style is almost everywhere and is oppressively pervasive. Well, we understand the distaste when shopping for black dress shoes. Cap toes, though serviceable, they stylistically don’t agree with all people’s purposes.

So instead, they opt for a sleeker, more modern, plain toe Carlyles. You can dress these down with chino or have them polished to a mirror shine, and dress up to a black-tie.

Allen Edmonds is a product of Wisconsin, a shoe company that was founded in 1992 by Elbert W. Allen. Ralph Spiegel was the first investor and partner but was later bought out by William Edmonds. Henceforth, the company was branded, Allen Edmonds.

The company quickly gained popularity due to the innovative manufacturing process like eliminating nails and metals in their construction to provide more flexible and lightweight footwear. The shank of Allen Edmonds is usually derived from wood to enhance durability while ensuring comfort.

Designed with skinnier and more elongated last, the Carlyles will fit a tad tight on wide feet. The silhouette of the Carlyles is pretty much attractive and is improved with smooth lines and gentle sloping curves. While European shoes are generally neater, there’s something distinctly less “American” about the overall design of the Carlyles.

Straight out of the box, the texture and surface of the calf feel kind of strange; the leather used here is meant to be a bit stiff and finished, and not really as supple as other brands like Chester wingtips. One would argue that the shoes need some break-in period but be informed they will likely hold on to some form of factory finish.

You probably know what to expect here: Allen Edmonds Carlyles are solidly made Goodyear welted shoes. Nothing overly plush, but decent quality nonetheless. Carlyle’s feel like they can take a beating and still be polished right back to the initial look.

Perhaps the only catch is the finishing on the edges of the cowhide pieces: they’re not only dyed, contrasting against the black leather, but also look like they’re fraying slightly. And whether that’s a blemish or it’s just how they’re made, it’s still very much of a problem.

Unlike most other Allen Edmonds dress shoes, Carlyles are designed with Flat waxed laces, rather than the standard, spaghetti thin round style. We found them easier to dress up as opposed to the typically waxed round laces used on most dress shoes. The lines also add a little more visual heft to such a simple design, making them easier to dress down if you so wish.

If you choose to go casual, use the standard criss-cross method: it’s more like losing the tie, but in this case, for your feet. Still, you could just stop overthinking and have your shoes laced the same way throughout.

Due to being seconds, Carlyles are associated with blemishes and hairline flaws. This might include a couple of nicks and scratches and an odd crease mark near the right heel. However, you can rest assured the shoes will begin to blend right in as you wear and polish them.

The last is relatively unique. Certainly not the same last found in popular Strand and Park Avenues. Allen Edmonds boasts the 108 last, which is also recognized by some elongated and tapered, flatter toe.

While some folks find these shoes a little tight through the middle, we found them relatively accommodating for slightly wider feet. So if you’re on the border (wide vs. medium sizes), you might want to wear thicker socks and maybe try jumping up a width.

As far as unadorned dressy fashion statements go, wholecut, plain toe, and cap toe all suffer the same subjective formality. Some people claim that cap toes are the most formal shoes one can own, whereas others find wholecut to be more formal.

Nevertheless, the important thing to consider is the context: wholecuts on one hand may be appropriate for dinner, but are completely out of range for use in the office. Meanwhile, with Carlyles, you will enjoy more versatility, though there are always pros, cons, and nuances to each.

In the absence of the rigid line of the wholecut, plain toe, and toe cap, oxfords generally suffer the same problem: garishly noticeably creasing.

However, that’s not to say that creasing shouldn’t occur. Creasing is absolutely common and it’s awkward to try to prevent any creasing regardless, as shoes will naturally crease with wear.

That said, some shoes will simply look better with creasing than others. A toe cap works as some form of construction for the crease to form around, as well as framing the crease between the line where the cap ends and the vamp begins.

With the absence of this framing, the crease will break the supposed uninterrupted curve of a plain toe, which makes the shoe look crude and rather unattractive.

Generally, Allen Edmonds will never go out of style. But if you’re looking for a simple shoe that brings a less dusty, dimly lit corner outlook, then the Carlyle is certainly what you should consider. You’ll have to break into the Carlyles more. The creasing will soften up as more creases develop and the shoe molds to your feet.

Examining the creasing, you will note a distinct line, right about where a cap toe would start. Based on most people’s experience, the hardest creasing should be on the widest part of the shoe. Also, note that sizing with difference lasts is tricky. If you’re planning to buy Allen Edmonds Carlyles, then you need to pay close attention to this, especially if you’ve only owned one or two other pairs of shoes.

Ultimately, Allen Edmonds Carlyles are still quite possibly the best bang-for-your-buck dress shoes on the market. At this point, we can only nitpick, and for $200, the critics we may have with the shoes are negligible.

It's not often that you come across a pair of shoes that is both comfortable and stylish. But the Allen Edmonds Carlyle has managed to find this balance, fusing a sleek sneaker silhouette with an ortholite footbed for allover cushioning and support. 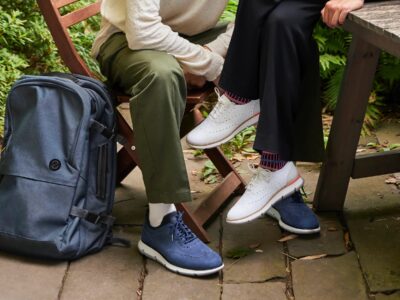 Is Cole Haan A Good Brand?