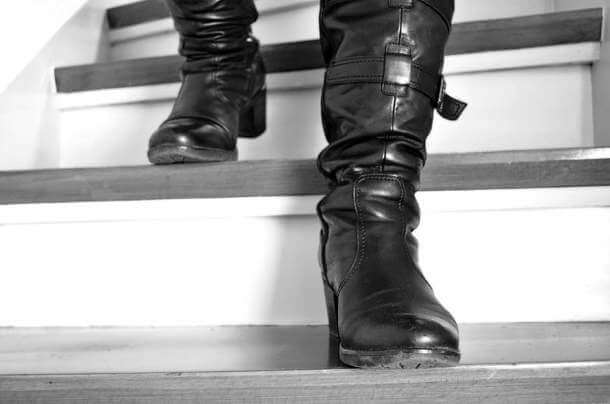 Boots are well among the most popular footwear, mostly recognized for multiple applications. Various footwear designs have come and gone, but boots are still thriving, and they don’t seem going anywhere any sooner.

One common gripe with boots, however, is that they tend to squeak while walking. Although they are not exactly dangerous, noisy boots can be annoying and bothersome.

There are many reasons and conditions that can cause squeaks in your boots. Therefore, to find the right solution, you need first to isolate where the sound is coming from. You need to determine what is causing the squeaky sound.

You might want to have a friend to put her ear closer to the surface while you move. This will help isolate which part is squeaking. Nonetheless, below are the hacks that can help stop the problem:

This method involves baby powder, talcum powder or cornstarch, and (sometimes glue). Take the problematic boot and check whether the footbed is removable. Most boots are designed with removable insoles.

Remove the inserts and set them aside. This will help you have greater access to the upper part of the outsole on the boot’s interior.

In case of non-removable insoles, you might want to detach it a bit tactfully and then glue it back once you have addressed the problem. If you’re not sure about removing the insole, you can ideally take it to a cobbler for professional services.

After removing the insole, the next thing is applying the powder. The type of powder you use is not that important as they all have the same purpose.

Powder helps to wick moisture between the sole and the upper of the shoe, making both surfaces to slide against each other smoothly and seamlessly without rubbing or vibrating.

Be sure to apply enough powder to cover the whole section. Once you’ve applied the powder in the boots, keep the pair intact for at last 24 hours. This will allow the powder to absorb excessive moisture within the interior construction of the shoes.

When the time is due, get rid of extra powder by knocking the boots with each other, preferably from their heels. Put the inserts or footbed back into the shoes and glue them where necessary.

This is one of the most common methods of silencing squeaky boots. So it should work. But if that doesn’t work, you might want to consider other approaches, as discussed below.

This method may (or may not) crumpled newspaper sheets. Apart from the friction between the upper and the outsole, your boots could be squeaking due to excessive moisture trapped inside.

It’s common for moisture to accumulate within the boots over time. Boots are generally not the most breathable footwear, meaning they can get sweaty at times. Thus, you might need to dry the boots manually.

One of the best ways to dry boots is by hanging them in a warm room to dry. Detach the inner lining to make the drying process much faster and effective. Hang the boots by the laces somewhere and leave them to dry.

You might think that leaving your boots outside in the sunshine is a better idea, but take note that most boots are made of leather, and the heat from the sun can actually wreak havoc on the fabric.

For best results, just leave them hanging in a warm room, away from direct sunlight. Be patient, and the squeakiness will disappear.

Old newspapers can effectively come in handy for various applications. They are particularly helpful if you don’t have baby powder or talcum. You will probably have old newspapers lying around the premises.

Start by detaching the innersole and stuff the shoes with it. Stuff the boots with the newspapers until no space is left. Then leave them overnight. The newspaper will work much more like the dryer sheet to wick the moisture from the shoes. Hopefully, this will help get rid of the bothering sound. Still, you can consider using dryer sheets, as discussed below.

This method basically involves a dryer sheet and glue (though the glue is optional). It is much similar to using a powder, but instead, you will be using a dryer sheet or paper towel.

Remove the insoles from your boots and then place the dryer sheet or paper towel between the outsole and the loner.

The paper towel or dryer sheet will wick excess moisture that’s making the boots squeak. Be sure to place the sheet properly inside the shoes before leaving them to dry.

Once you’re satisfied, the boots have dried out, detach the sheets, put back the inserts, and then try walking to see if the issue is solved. Still, there’s another method you can consider should the drying method fail.

This method only requires coconut oil or mink oil. It’s not uncommon that even after removing the excess moisture within the boots will not help stop the squeak. The problem may remain after using dryer sheets and baby powder.

When that happens, it could be because leather is rubbing against the outsole where they are connected, creating constant friction with every step.

Similar to other methods, you need to detach the footbed or insoles for that matter. After removing the insoles, apply the coconut/mink oil around the joint between the upper section of the boot and the sole.

The oil helps smoothen the surfaces making contact when you walk, reducing the rubbing and friction between them. After oiling your boots, leave them overnight to air dry the oil into the boots. Then put soles back into the boots after the oil has dried up. If all other hacks fail, at least this one should work.

These are tried-and-true methods that can help get rid of squeakiness from your boots. Choosing the right one isn’t difficult, either. You just need to isolate the cause of the problem and start with the solution that seems most suitable for you.

The baby powder method is probably the most common, but many people also count on coconut/mink oil. While we hope these methods will help you out, there’s nothing wrong with taking your favorite pair of boots to a professional cobbler. They can get the problem solved for you.

Can You Wear Basketball Shoes Casually?

Why Are Sneakers Called Tennis Shoes?